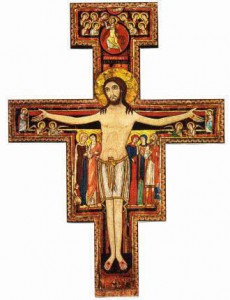 The Third Order, Society of Saint Francis (TSSF), whose members are usually called Tertiaries, is the present day Anglican expression of the Order of Penitents, founded by Saint Francis of Assisi in the early 13th Century. The original Order of Penitents was founded for those who could not leave families and dependents but who wanted to follow Francis as far as possible in the way of poverty, chastity and obedience.

Francis had already attracted to his own calling many men who  became known as Friars Minor, (or “Lesser Brothers” in English). Their mission and ministry was to preach the Good News of our Lord Jesus Christ and to make our Lord known and loved everywhere. With his encouragement a woman named Clare had established an enclosed Order of women, and they became known as the Minoresses, or the Poor Clares. Yet many were interested in following Francis who could not leave homes and dependents and so Francis wrote a rule of life for them to live under.

In the aftermath of the Reformation in England many of the traditional Catholic monastic movments (including the Franciscans) declined.  Renewed interest in re-establishing monastic orders to the  Church of England began in the late 1800’s. Early in the 1900’s various communites with an interest in the Franciscan ideals were re-established and the Society of St Francis was a development from this renewed interest. We have now the Brothers of the Society of Saint Francis (SSF) and the Sisters of the Community of Saint Francis (CSF), and those of Saint Clare and the Community of Saint Clare (who by tradition use the letters OSC after their name), and then finally the Third Order (TSSF). There are now representatives of all these groups in many of the provinces of the Anglican Communiuon around the world.

Very truly, I tell you, unless a grain of wheat falls into the earth and dies, it remains just a single grain; but if it dies, it bears much fruit. Those who love their life lose it, and those who hate their life in this world will keep it for eternal life. Whoever serves me must follow me, and where I am, there will my servant be also. Whoever serves me, the Father will honour.’  (John 12.24-26)

The object of the Society of Saint Francis is to build a community of those who accept Christ as their Lord and Master, and are dedicated to him in body and spirit. They surrender their lives to him and to the service of his people. The Third Order of the Society consists of those who, while following the ordinary professions of life, feel called to dedicate their lives under a definite discipline and vows. They may be female or male, married or single, ordained or lay.

When Saint Francis encouraged the formation of The Third Order he recognised that many are called to serve God in the spirit of Poverty, Chastity, and Obedience in everyday life (rather than in a literal acceptance of these principles as in the vows of the Brothers and Sisters of the First and Second Orders). The Rule of The Third Order is intended to enable the duties and conditions of daily living to be carried out in this spirit.

Our Order believes that it is the commission of the church to make the gospel known to all by bearing witness  to Christ through word and example in our our daily lives. We remember St. Francis’ injunction to “Preach the gospel at all times, if necessary use words”. (But even so we recognise we have role in conveying to the world the need of a Jesus focused life, expressed by word and deed).

The Order sets out, in the name of Christ, to break down barriers between people and to seek equality for all. We are pledged to fight against the ignorance, pride and prejudice that breed injustice of partiality of any kind. We try to live in the spirit of of St. Francis’ prayer: “Lord, make me an instrument of your peace.”

Although we possess property and earn money to support ourselves and our families, we show ourselves true followers of Christ and of St. Francis by our readiness to live simply and to share with others. We aim to stay free from attachment to wealth, keeping ourselves constantly aware of the poverty in the world and its claim on us.

Individual expressions of the aims

It is left up to the individual for a following of a personal Rule of Life how they give expression to those aims in their work and family live, in their church and local communities. The Rule of Life includes commitments to regular worship, personal prayer and self denial (fasting). Fasting can include giving up time for others. There are also commitments to personal study of the bible and other areas of service and work, to increase our understanding of our calling and to more fully participate in the mission of Jesus through our calling.

It is of course quite a challenge to be faithful to such a calling and to keep coming back to those aims, to keep a renewed vision of discipleship of Jesus in this mode of expression and devotion. We have local groups who meet to support each other and wider area meetings. Once a year, normally in the first week of October (close the the commemoration of St Francis., Oct 4th), we renew our commitment to membership of the order and to its Principles and Aims.