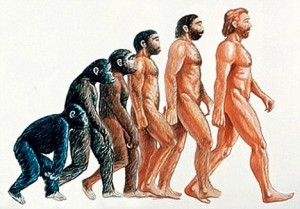 This and other pages under this heading are related to ourselves as evolved creatures, our potentials and our nature as “Fallen” from that potenntial.

Genesis chapter 1 refers to humanity being made “in the image of God” (Imago Dei). But what might that mean if as according to science humanity is an evolved being from natural origins?

How may the great biblical stories and images of our origins be re-expressed in a contemporary way? Certainly humanity is not just an accident of natural development but instead evolved with specific purposes in our coming to be.

Seeing our origins in new way

We should accept the growing evidence and theorries related to the biological development of the human species over time but this need not detract from the spiritual truth that humanity is from the first destined to be different from the rest of non-rational creation and is formed to be in communion with God. Our best existence now and in the future stems from accepting that profound truth that can give direction to our personal development as individuals and society.

In the pages under the heading of Humanity I consider various aspects of the divine intention of what we are called to be, drawing on insights from Scotus and Bonaventure and also some other modern theologians.

I consider firstly here what insights the biblical stories can still say about our purpose as beings who have come from God, our natural abilities and our intellectual and emotional faculties as evolved characteristics. Evolution can offer a way of seeing how these things arose historically by natural processes but we need spiritual growth to achieve the best attainment we can achieve.

The stories of Genesis about creation should no longer be seen as some kind of primitive history of the earth but as tales about “Everyman”, they are stories of our purpose and relationship in the present, of God’s intentions for us and how we may be at our best as evolved loved and loving beings.

26 Then God said, “Let us make mankind in our image, in our likeness, so that they may rule over the fish in the sea and the birds in the sky, over the livestock and all the wild animals, and over all the creatures that move along the ground.”

28 God blessed them and said to them “Be fruitful and increase in number; fill the earth and subdue it. Rule over the fish in the sea and the birds in the sky and over every living creature that moves on the ground”

In this first Genesis account humanity is seen as a final act of creation and in that respect it follows the evolutionary history. There is here a divine intention to create humanity to have a special role and to have special relationship to the divine origin. In a Franciscan Trinitarian context the God who forms us is a God who is loving community, our nature is to be characterised by this love beyond our animal origins.

Whatever the process by which humanity first came into existence the Genesis story tells of God giving humanity a special place and having a “dominion” over everything. Clearly human beings are endowed with particular powers and characteristics that enable us to shape our environment.

It has been noted in various theologies in recent times that the word “dominion” is not to mean we are to do as we like but that our relationship with nature and the world should reflect the loving intention of God who loves all that He has made.  If our lives are truly marked by the Trinitarian image of divine loving then so will our relationships with the rest of creation around us. Humanity as an evolved creature has the purpose and the ability to share the divine nature in Trinitarian love and caretaker of the world.

It should also be noted that in Genesis 1 there is no differentiation between men and women and God creates both “in our image and likeness” and both are given the divine dominion over other things. Both are divine image bearers, which might be viewed as a radical testimony of equality in an otherwise patriarchal society. Perhaps that initial story should challenge any presumptions today about defining too strongly differences between male and female roles in the church and society.

The account of the creation of humanity in Genesis 2 is a quite separate story and most scholars believe to be from a much older tradition than the account in Genesis 1.  It is also part of longer narration that carries on into chapter 3 where there is a story of disobedience to God’s commands and the consequences of those actions. I will leave consideration of that follow up narration at a later date.

The Lord God said, “It is not good for the man to be alone. I will make a helper suitable for him.”

But for Adam no suitable helper was found. 21 So the Lord God caused the man to fall into a deep sleep) and while he was sleeping, he took one of the man’s ribs and then closed up the place with flesh. 22 Then the Lord God made a woman from the rib he had taken out of the man, and he brought her to the man.

In this older story God is conceived anthropomorphically, making man like a potter (Gen. 2:7). Unlike Genesis 1, in this story there is recognition of a differentiation between Man and Woman, although it should not be used and abused as a reason for the subjugation of women today. The story reflects the context of the patriarchal society in which it grew up along with other religious stories from the same region. On the other hand there is an emphasis on the complimentary nature of Man and Woman with God’s intended partnership that is to be made real in the partnership of marriage and commitment of a man to a woman creating a new family centre. It is a complentarity that is ruined by the evil desires of humanity that enter onto the scene, disturbing the original divine intention.

The final part of the story points to a form of innocence, naked but not ashamed, and yet obviously with some degree of choice that forms part of the backdrop to the continuation of the narrative into chapter 3. It is evident even from and evolutionary point of view that humanity passed through a period of development from a state of “innocence” (with little ability to make moral choices) into a state where moral choices became possible and then hence the responsibility for their actions. An increasing development of possibilities of free-will decisions came about but also increased responsibility to God for those choices. We are evolved beings capable of moral action and choice, which as other parts of the bible show is abused and for which we are accountable.

There is then in both Genesis stories a specialness and purpose in the creation of humanity from which we can still derive purpose even in the light of evolution and a much longer period of development:

Evolved to be beings who carry in themselves something of the divine nature of loving, from the Trinity and drawn into the Trinity from whom we came into existence.

Evolved for fellowship of each other in partnerships, between male and female, in family and with others in the wider community

Evolved to be shapers and caretakers of the world, to shape the world with our skills, to be able to use the resources of the world for our well-being, but done within the scope of God’s intention and purposes. Not to dominate the world but to express the Trinitarian love towards each other and towards the rest of the natural world.